To me, Sunday mornings aren’t complete without two things: bacon and National Public Radio. This American Life is one of my favorite shows to listen to while eating bacon: Ira Glass’s bland, nasal vocal tones complement the salt and fat in my breakfast treat, and the whole thing is just about as much enjoyment as you can have with your pants on. 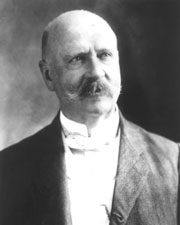 In episode 413, the journalists from the show visit several different counties in Georgia, and reporter Nancy Updike mentions in passing that two of Georgia’s adjacent counties are named Coffee and Bacon, but not for the reasons you might think: they’re named for people. (Seriously, maple syrup glazed bacon: RESULT. Kick those starchy pancakes to the curb.)

So I was reading about Senator Bacon, and thought that maybe I’d mine his biography for some comic detail, and when I found that that he was Chairman of the Committee for Engrossed Bills, I thought, “This stuff writes itself.” But I gulped when I found Senator Bacon’s most enduring legacy: in addition to being a soldier in the Confederate Army, his dying act was to establish in his will a whites-only “public” park in Macon, Georgia. If he thought his will would stand up in court, Bacon was mistaken about Macon. The Supreme Court struck down his bequest, but it certainly makes Bacon less a figure of fun and more of a reminder of how hurtful and backwards this country’s prejudices once caused people to behave.

If Senator Bacon were alive today, I don’t know what he’d think about having a black President in the White House: maybe he’d be among the erroneous few who falsely believe Barack Obama is a bacon-eschewing Muslim. But I for one am glad to live in the America where the Union triumphed, and where the 14th Amendment will forever ensure that a park is where whites and others meet.