This Little Piggy Had Popcorn

Being a connoisseur of bacon I've tried a lot of products. A LOT. Some good. Very very mouth watering good. And some bad. Hideously awful terrible yuck-face bad. I once had the displeasure of trying bacon flavored popcorn that was so greasy that the bag was wet before it was even popped. Ga-ross.

I'm a little late to the party on these first two items thanks to my stupid life getting in the way of my bacon-loving lifestyle! But I still wanted to share, cuz I'm suuuuuuch a nice person.

A good friend on mine (who had already bought me Bacon Bandages cuz she's AWESOME) recently sent me this mini-comic book called, Is It Bacon? by Matt Wiegle.

UPDATE in the World of BACON

Hello, Bacon Today readers! I have many things to tell you, all relating to bacon. (Naturally, what else?) So sit back and enjoy.

Lady Gaga: A Vision in Meat

2 words I never thought would go together: MEAT and DRESS. But then you add these 2 words and it all makes sense: LADY and GAGA.

Recently while I was at the Limelight Marketplace in downtown NYC, I realized that if you like bacon desserts, Limelight may be your new hangout. 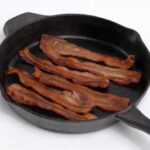 Did you know that bacon started in China around 1500 BC? Yeah, neither did I! (I'm not exactly sure where and when I thought bacon was “born” but I know I wasn't thinking it was during the Shang Dynasty.)

I've mentioned it before, I'm a big fan of Twitter. I've been introduced to companies I never would have heard of without it. And one of those companies is CupcakeStop.

While scrolling through Etsy, I came across CoolThings1's awesome product: BACON BARRETTES.

As a girl, I'm interested in anything that has to do with soap. (Fact: I used to go out and buy new soap as a 'pick-me-up' in college. Some people drank, I washed.) I love the feel of soap, the smell of it and most importantly, the cleanliness of it all. (If you haven't guessed, I'm a Type A personality. I know, shocker.) So when I got the tip that “there's a guy out there that makes soap out of REAL bacon,” I lit up like a barbeque grease fire in July. REAL BACON SOAP? Not just soap that looks like bacon, but REAL SOAP WITH BACON IN IT?