We’ve all seen the bacon cinnamon rolls that are made with Pillsbury dough and bacon strips. In fact, we probably have that recipe somewhere here on Bacon Today. But nothing beats making homemade cinnamon rolls from scratch. NOTHING! And when you sink your teeth into one of these warm, soft, sweet, bacony, doughy cinnamon rolls, you will never go back to pre-made dough again. Well, you might, but you’ll be thinking of these as you eat them, pretending they are “the real thing.” Make them for Mom on Mother’s Day to show how much you love her. And how much you love BACON! 1. Add the yeast to the ¼ cup warm water to proof the yeast.

2. In a 5 qt. bowl of a stand mixer fitted with a dough hook, mix all of the dough ingredients in the order given until a soft dough forms. Check the dough. It should form a nice elastic ball. If dough is too moist, add extra flour 1 tablespoon at a time. If it is too dry, add 1 tablespoon warm water at a time. Dough should feel slightly tacky to the touch.

3. Turn out onto a lightly oiled surface and knead until elastic, approximately 10 min. You can also use your dough hook and knead in the mixer.

4. Cover the bowl with plastic wrap and let rise until double in size.

6. After dough has risen, use a rolling pin to roll and stretch the dough into approximately a 15” x 24” rectangle.

7. Brush the ½ cup softened butter over the top of the dough with a rubber spatula or a pastry brush.

8. In a medium sized bowl, mix the cinnamon, brown sugar, and bacon bits until blended then sprinkle the mixture over the butter on the dough.

9. Starting with the long edge, roll up the dough; pinch the seams to seal. Rolling the log too tightly will result in cinnamon rolls whose centers pop up as they bake.

11. Cover the rolls and let rise in a warm place for about 45 to 60 min. until doubled in size. After rising, the rolls should be touching each other.

13. In the bowl of a stand mixer with the paddle attachment, mix the cream cheese, the butter, and vanilla extract from the frosting ingredients on medium high speed until well blended. Then add the powdered sugar and the splash of milk. Mix on low for about 2 min. then increase the speed to medium high and mix until no lumps are visible and the frosting is smooth.

14. Fill an icing bag with a large open tip and ice the rolls in a spiral motion following the cinnamon swirl, then sprinkle the candied bacon on top and serve. Place in microwave for 15-20 seconds for warm rolls. 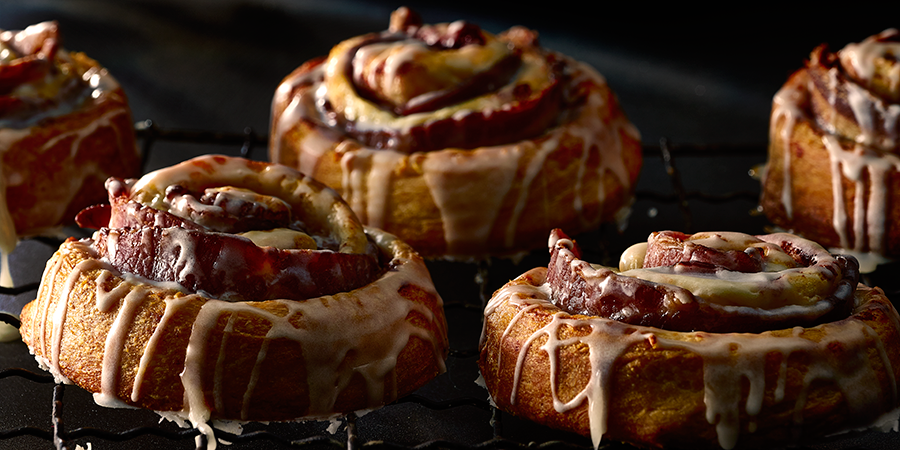