Football. Bacon. Yeah, this post is about sports. And meat. It’s not hard to please a football fan on game day. Give us bacon, cheese, fat, salt, carbs, beer and alcohol. It’s not too difficult.

Maybe it’s just me, and I don’t know if Martha Stewart or Pinterest is to blame (maybe it’s a combination of both). But there’s too much stuff out there, giving people ideas and taking game day food to a whole ‘nother level. Take this edible stadium for example. 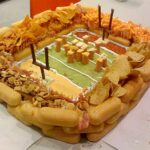 How do you even eat that thing? Would you even want to, considering how many hands have probably been all over it during its construction? Football food should not be constructed. Haphazardly thrown together, yes. Constructed, no. Consider these:

The rules of football foods are easy. There shouldn’t be much green stuff. Or cutesy stuff. Forget Pinterest. Football fans don’t care much how their food looks. Not on game day. Just give us the meat! And the fat, the cheese, the beer… Yeah baby! You’ve got it now.

These awesome bacon recipes are suitable for game day, your next fantasy football meeting, and Super Bowl Sunday. Because I think we’re all in agreement that bacon should be plentiful on game day! Some of these are standard football food fare, and some are items that you should consider adding to your next game day spread. Like more BACON! The standard bacon-wrapped hot dog is improved by stuffing it with cheese first. Why make ordinary onion rings when you can make BACON rings?

These jalapeno poppers leave out the cream cheese and add sausage and cheddar cheese instead. Cheesy bacon oven “chips” with chipotle ranch are a step up from regular chips and dips. Loaded potato skins must be loaded with bacon on game day!

Chowing down on bacon strips is encouraged on game day. Especially if it’s BEER bacon.