October 14, 2015 1:11 am Published by bacontodayadmin Leave your thoughts

With Fall arriving today you know Thanksgiving will be upon us in no time at all! Like Pavlov’s dog, the arrival of fall gets us thinking about seasonal tasty, fall-flavored lattes. Chai Lattes, Peppermint Lattes, and the all-time favorite—Pumpkin Spice Lattes (a.k.a. PSL) are now available at coffee shops across the country.

We’re still looking for a latte with the one flavor that these coffee shops seem to be missing. So … since you’re here at Bacontoday … can you guess what flavor we’ve got on our minds. Yep, that’s right. It’s BACON.

As soon as the thought of a bacon spice latte sizzled in our mind, we knew we had to make it. Thus began our journey to concoct a beverage that was seasonal, sumptuously scented and seriously scrumptious.

Our sources told us of a Bacon Maple Latte created by the founder of the Pirate Cat Radio Cafe and popularized by the late Anthony Bourdain, noted celebrity chef, author and food documentarian. The Bacon Maple Latte was made, we learned during the “No Reservations” TV show episode, using a mysterious ingredient called refined bacon.

Sadly, at the time of the writing, both the Pirate Cat Radio Cafe and Anthony Bourdain are no longer with us.

To make our own caffeinated cup of glory we started with Boss Hog’s Maple Bacon Coffee (brewed strong), with milk, sugar, and pumpkin pie spices.  There’s no real bacon in this drink, but we’re positive any true coffee + bacon lover will enjoy this BSL. 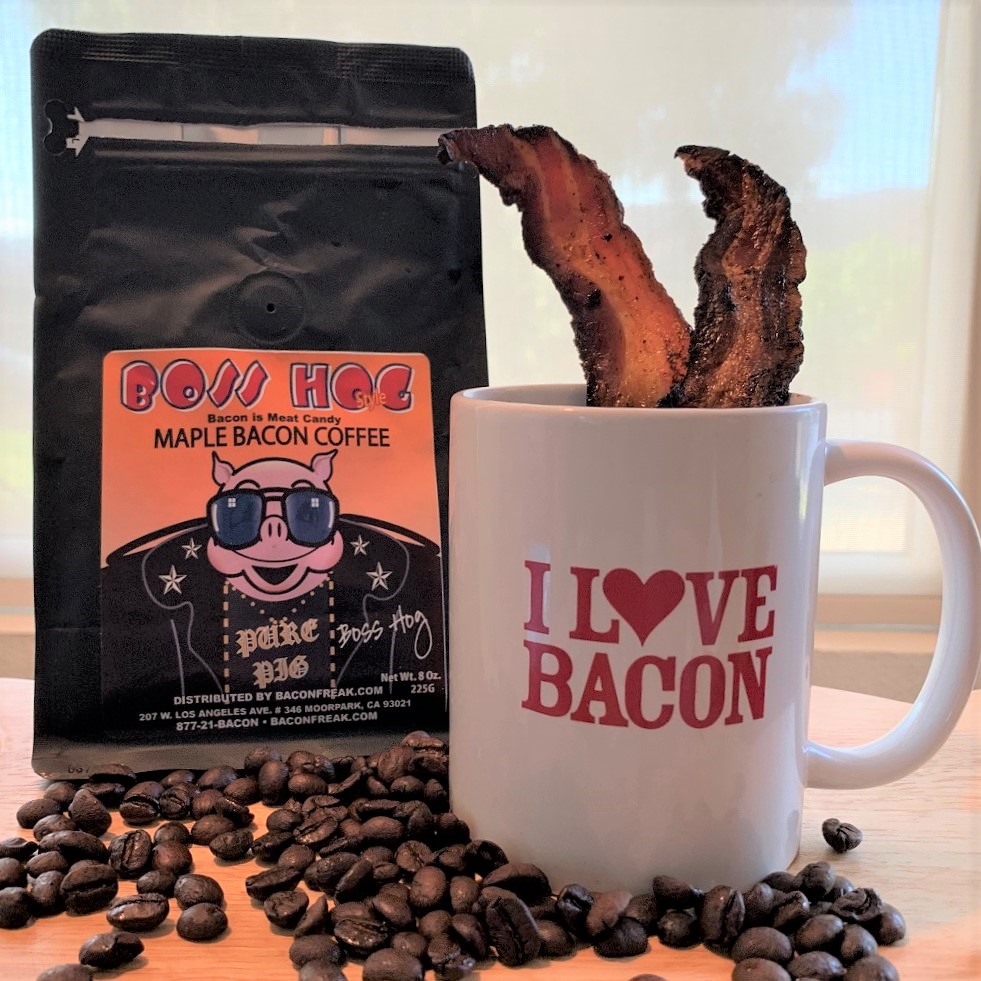 Bacon Spice Latte Directions:
Traditionally made with espresso rather than coffee, we found a strong brew of coffee worked well for this recipe. You can use espresso instead of maple bacon coffee, but without the mysteriously refined bacon ingredient used by Pirate Cat Radio Cafe, or the maple bacon coffee, you just won’t get the same maple-bacon flavor. If you do use espresso, you’ll want to add in extra bacon flavoring syrup and possibly a splattering of maple syrup.

Brew the maple bacon coffee (or espresso) and divide it into 2 regular-sized coffee mugs.

In a saucepan, heat the milk, sugar, and pumpkin pie spice over medium heat until hot. Don’t let it boil. Heartily whisk the milk as it heats to create a foamy mixture.

Remove from heat, then stir in the vanilla and Torani Bacon Flavoring Syrup. Gently pour the milk mixture into the 2 mugs of coffee, keeping the foam in the pan.

Top off with a layer of foam. Garnish with a dash of pumpkin pie spice or a slice of crispy bacon, and serve!