June 24, 2015 3:33 am Published by bacontodayadmin Leave your thoughts 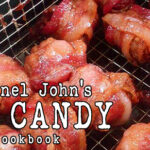 Our carnivorous, meat-loving bacon fans need to check out Flanneljohn.com. Tim Murphy AKA “Flannel John” is a cookbook author who specializes in cookbooks that are geared towards men. However, both men and women will want to dig in to these meaty recipes. His “Cookbooks for Guys” series includes simple recipes guys can make fast because, as Flannel John says, they’re “lazy and hungry.” What started as a joke for cooking-impaired friends has grown into 31 titles. In addition to our favorite, the Man Candy cookbook, other cookbook titles include Beer Barrel, Carnivore, Lazy Guy, Hunting & Fishing, Mountain Man and the Killer Burger.

The Man Candy cookbook is all about bacon. Flannel John’s love and respect for bacon is apparent in the recipes, and according to him, “Bacon is the only food that can turn a full-fledged vegan into a drooling carnivore.” It has 50 recipes including main dishes, sandwiches, soups, desserts and appetizers like the Bacon-Wrapped Cheesy Tater Tots pictured above. As promised, the recipes are very simple to prepare and many utilize only a handful of ingredients, and only a few recipes exceed 10 ingredients. Examples of bacon-filled recipes include:

Tim Murphy grew up in Chicago and graduated from Western Michigan University. He has spent 19 years as a morning DJ in several states including Michigan, North Dakota, Wisconsin, Wyoming, Alaska and Oregon. Murphy has had a long career as a freelance and comedy writer. His work has appeared in dozens of publications including Backwoods Home Magazine, The Porcupine Press, U.P. Magazine, National Lampoon, The Traverse City Record Eagle and ABC Radio Network.