This recipe comes to us from Chef Gihen Zitouni of Bistro One LR at the Ritz-Carlton in South Beach. This restaurant is well-known in the industry for being innovative, trendy and fashionable, with its contemporary twist on Portuguese cuisine, as well as its sleek, modern interior. This dessert “pizza” combines savory bacon with sweet Nutella and caramelized strawberries, and is finished off with marshmallows and micro basil.

Chef Gihen Zitouni joins the Ritz-Carlton, South Beach after a culinary tour which led her through The Ritz-Carlton Penha Longa Hotel and Golf Resort in Portugal, a luxurious property close to Lisbon, where she worked as the Head Chef, overseeing all outlets including Restaurant Il Mercato, Lobby Bar Bistro and Serra Restaurant. Most recently she was the Chef De Cusine at Toca Restaurant located in The Ritz-Carlton, Toronto. Prior to this role, Chef Gihen was the Restaurant Head Chef at Arola under the mentorship of renowned chef Sergi Arola, a two-Michelin star chef. Her culinary career is highlighted by being named one of the Top 10 restaurants chefs in Portugal from Time Out magazine in 2010 and hosting Top Chef Germany. 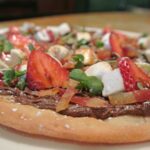 • Roll the pizza dough, precooked in oven at 310 degrees for 7 minutes
• Spread the Nutella
• Add the strawberries with caramelized sugar, marshmallows and the sliced, cooked bacon
• Add the fresh basil
• Finish with icing sugar 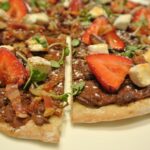