October 12, 2014 3:33 am Published by bacontodayadmin Leave your thoughts

Here at the Bacon Today Headquarters, we are anxiously anticipating the season premiere of The Walking Dead Season 5 on Sunday! One of the highlights of last season was the scene where Chandler Riggs’s character ate a ginormous can of chocolate pudding on a rooftop after narrowly escaping a horde of zombies. After this episode, fans tweeted a record number of tweets about the pudding scene. Fan art, t-shirts and memes have also become popular. Here at Bacon Today, we eat our chocolate pudding with LOT OF BACON, and so we threw Carl’s Chocolate Bacon Pudding together to celebrate the season premiere. Here’s to Carl, and here’s to seven pounds of Chocolate Bacon Pudding! 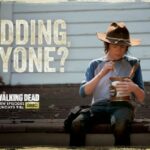