Do you love bacon? Do you love video games? Did you play video games in the “golden age” of gaming, the 80’s and 90’s? Then you should check out this Kickstarter campaign for the video game: “Bacon Man: An Adventure.” Bacon is the all-American symbol of love. With the passion for mechanically-separated pork and guns, there is nothing more fitting than Bacon in a red, white and blue suit. The game is a full 3D side scrolling action platforming game. It mixes fighting, shooting, and physics-based abilities to create a challenging experience in a beautifully-rendered world inspired by the food groups.

Armed with his toaster gun, Bacon Man navigates levels such as the Freezer, the glorious Meat Zone, delectable Dairy Zone, floating Pomegranate City, vast deserts of Udon, and the Vegan Valley and faces enemies with names like Excaliboar (a bacon-hater, booooo) and Shrimp Valkyrie. 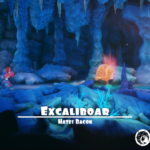 Bacon Man will be available for Mac and PC and will have an original score with classical orchestration. What do you think–would you play Bacon Man?