Some of you may have heard of the Millionaire’s Bacon. It’s also known as the Million Dollar Bacon. We looked into why it’s called that but we honestly couldn’t find any origins. We think it’s just because bacon is already delicious and the addition of the sweet and spicy flavor after you taste it, makes you say, “WOW! This tastes like a Million Bucks!”

But again, we’re just guessing. Personally, I think we should call it the Billion Dollar Bacon. Because we all know that a billion dollars is much better than a million. (Imagine how much bacon you could buy!) Well, enough of our jibber-jabber, here’s how you make this recipe of magical meat! 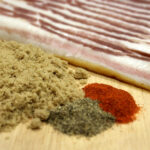 Set your oven to 350 degrees

Directions:
Line a baking pan with foil. Combine all of your spices and sugar together into a bowl and mix thoroughly. If you want your bacon more coated in sweet and spicy flavor, add more ingredients to your liking. Apply liberally to each strip of bacon by taking each strip and hand rubbing them. Bake until crisp for 20- 30 minutes (depending upon your crispy liking).

I found much of the sugar-spice coating bubbles off the bacon as it is cooking so I devised an alternate method where you first dredge the raw bacon strips in flour then in an egg wash before you coat with the sugar & seasonings. This method helps the sugar and spices stick to the bacon.

Please let your bacon cool a little after you’ve made this recipe. We don’t want any casualties or mouth burns! You have to keep those taste buds intact in order for you to enjoy the deliciousness of bacon. Now, print this recipe and get off the internet! Make it!