Bacon and Booze: Recipe for Champions How and when bacon was created, we’re not exactly sure. We think that many years ago, upon searching for the Holy Grail, man found bacon instead. And with it, the knowledge to make more bacon. We know. It’s quite a miraculous thing; the human race hasn’t been the same since.

And now, in the 21st century, bacon is sweeping the nation with its salty, bacony goodness. It’s one of the biggest, baddest meats around. Coiling itself around other foods, creating a whole new edible beast; transforming dishes into something that is almost otherworldly in flavor, and laying the smack down on vegetables. Who knew asparagus could be so bold and… sexy? But have we really exhausted all of bacon’s resources? I really didn’t think so. Therefore, I wanted to take bacon to a greater, more adult level. I wanted to pair it with something boisterous and jovial. With the help of a few good friends, I went on a quest to combine two treats many of us Americans adore: Bacon and booze. Booze is the quintessential ingredient of good old fashioned tom foolery and comical shenanigans. However, she can be quite the temperamental vixen and must be treated with the utmost care. Otherwise she’ll turn on you just when you think all is fun and copacetic. In order to avoid this drama, (and not to mention headache), you must pair her up with other ingredients in just the right way. However, I decided to throw caution to the wind and dance with the devilishly good pork candy. You throw in bacon, and things just get a little crazier. Like when someone decides to use a piece of frozen bacon as a ninja sword… Yes, this happened. No, we don’t have video… unfortunately.

So within my bacon dreaming and boozy scheming, I wanted to take on two bacon drinks: The Bloody Mary Sue-eee and the Hawaiian Luau. Since I didn’t have six weeks to create my own bacon infused vodka, I went on a liquor store hunt for it ready-made. Instead of looking online, I went the old fashioned way of driving from location to location searching for this alcoholic enigma. (I did say this was a quest, right?) After what seemed like a dozen locations, and many puzzled expressions, I finally had it within my possession. Ready to take on the beast, I needed a small group of fellow soldiers to help me in this battle.

After I had gathered a few eager guinea pigs, err… I mean, soldiers, we were ready for our bacon drink challenge. However, much to my chagrin, a few of my fellow comrades got cold feet and decided to play the game of, “Oops, we broke the bottle of bacon vodka”. Not cool, guys. Not cool. Way to back up your Captain, soldiers. Luckily, after they saw my Lieutenant’s wide-eyed incredulous expression, as well as my mounting anger, they laughed and admitted that the bottle was hiding in the freezer. Good thing too. We definitely didn’t need mutiny among us, let alone the fact that we were quite thirsty. Finally the bacon drink challenge was going down and we were eager to face the beast.

Chill and serve in a hi-ball glass. Garnish with a pineapple wedge or other fruit. It can also be served as a martini or shot. I decided to go with the martini glass. We all agreed that this drink tasted just like you were at a Luau, eating succulent pork and juicy pineapple. We imagined ourselves surrounded by grass skirt and coconut top clad women dancing as the BBQ pit fire raged on. We could hear the drumbeat in the distance. It was an amazing combination; a genius creation of flavorful science. We rated this drink an eight out of ten points. Grab a cocktail shaker and add ice. Combine ingredients into the shaker. Shake and pour into a glass. Add the bacon in place of a celery stick. You can add olives if you wish. We didn’t, we just wanted to get down to it! This baby was the ultimate crowd-pleaser. It was definitely the best Bloody Mary we ever had. We all mastered this one and gave it a ten out of ten. I’m not even sure I want a regular Bloody Mary anymore. Once you go with bacon, that’s all you’ll be makin’.

The Bloody Mary Sue-eee concluded our bacon drink challenge and we came out victorious. The beast had been conquered and we felt confident that we could do it again. However, the challenge wasn’t over yet… Our friend, Rev, from Burger Conquest, also decided to mix booze with bacon and created an edible beast of his own. Instead of Russia’s favorite toasting drink, he decided to use bourbon. With this magical meat and drink medley he created the Bourbon Soaked Bacon Beast- mini burger style. Talk about a seriously enticing challenger! His soldiers devoured this beast and were anxious for more. We recommend taking it on yourself. 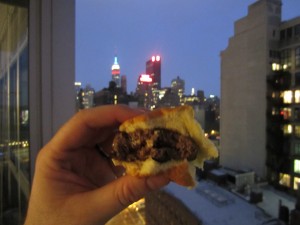 Honestly, we feel that the bacon and booze challenge may never be over. We encourage others to embark on this journey and to conquer their own beasts. Do you consider yourself a champion of bacon? Gather your own soldiers and create one epic battle. Bacon deserves nothing less. Bacon and Booze: Recipe for Champions. Seriously.