With Halloween just around a month-long corner, it’s time to start laying the foundation for your bacon-themed Halloween costumes. That means seeing what’s out there, what’s already been done, what’s available off the shelf, and what missteps to avoid. After all, you don’t want to simultaneously ruin Halloween and bacon, thus bringing disgrace to sweet and savory in one fell swoop, now do you?

10. Let’s start low on the totem pole. This is the off-the-shelf, last-minute idea. If you want to look like a Band-Aid with an amoeba as your date, this costume is for you. 9. Let this serve as inspiration to you: the man doesn’t have to get you down. You can still wear your costume while slaving behind your desk at your computer. But you will make people sad when they look at you. Also, your costume resembles Band-Aids at least as much as bacon, and though they are filed alphabetically near each other, they are very different. One heals wounds, and the other is a Band-Aid.

8. Getting the chef into the action is a nice way to raise the stakes of the eggs and bacon combo, and to turn this two-person costume combo into a three-way. I’m not sure I like the suggestion about the standard American diet that the acronym and the dry erase board suggest, but what I do like are the “We’ve already posed for five or six photos and are getting tired of pretending to be actors” expressions on the faces.

7. This is the kind of costume that I think would fare well at a Project Runway competition. It is elegant, understated, seem to be made well, and quietly and accurately conveys the essence of bacon. Bit of cannibalism going on here, but I like the costume. Here’s a photo Tom Colicchio and Nina Garcia could both get behind.

6. Winner of the Miss Bacon pageant! It’s the slit that puts it over the top for me. 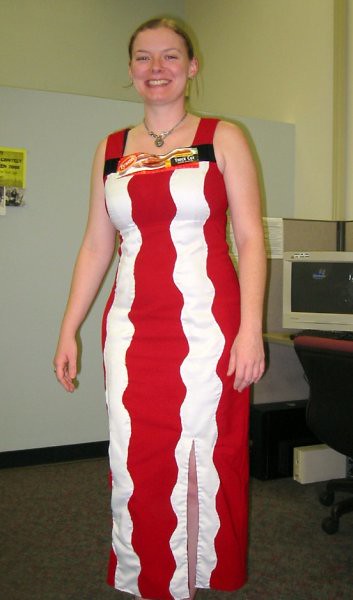 5. Marvelous! Great concept, great execution, and hey are you wearing your underwear on the outside? Finally a reason to be excited about the generally lacklustre Canadian bacon. Would be ranked higher, but who likes Canada?

4. I’m getting a little short of breath because of how excited I am to type the following sentence, which is also the caption for this photo: “Bacon high fives Zombie Jesus again.” Is there a way to win English? Cause I think that sentence does. Costumes are nice too. Zombie Jesus had a whole different set of disciples. One of them was bacon. Also he wasn’t kosher.

3. “The candy of meats” speaks! This lady provides step-by-step instructions on how to be just like her. Apparently her costume won her awards, admiration, accolades, and more than a few phone numbers. I’d rather have all that in my bag than a couple of boxes of Mike and Ike!

2. I’m almost reluctant to post this photo for fear it may spark its own blog: “Photos of guys dressed as bacon with hot chicks dressed as unicorns.” I can see it on Tumblr now. Wait, what would be wrong with that idea? I’d RSS the shit out of that web site.

1. Stop the presses. Hold the phone. Put down that fork. Spit out your chewing gum. Fire Lady Gaga. This gal reached for the stars, and she became one. If anyone’s wondering where that second-rate knock off pop star outfit idea came from, here’s the answer. Madam, you have raised the bar and then bought everyone a round of drinks at it. Congratulations for making us remember what we love about Halloween and about bacon.