Today at the office a guy named Scott asked if he could try the can of Spam with Bacon I had on my desk. As a joke I said sure, but he’d have to eat the entire can. Much to my surprise Scott accepted the challenge, grabbed a spoon, and dug in to the Spam with Bacon. I grabbed my mobile phone to capture the madness on video.

After about 5 minutes, Scott seemed to have met his match. He finished off nearly half of the can of Spam with Bacon and called it a day. A noble effort indeed.

About an hour later Scott returned with the can of Spam with Bacon. He said he had to finish the entire can or he felt he’d let the Bacon Today fans down. Finish he did and we have the 12 minutes of video footage to prove it. Enjoy! 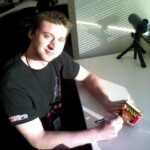