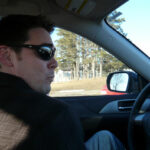 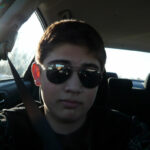 The mission was simple: find bacon in Elk River, MN. The players? Corey James and his cousin Travis Rand. We donned our sunglasses and set off on a sunny, 15 degree day in our hunt for nature’s meat candy. First stop? Von Hanson’s Meats.

Von Hanson’s had an awesome selection of meats. Chicken, beef, and of course bacon. We chose thick sliced, double smoked bacon and friendly staff member Dale wrapped us up a pound of the good stuff.

After Von Hanson’s we only made one additional stop. Super Walmart. Yes, I know we should have sought out additional small meat markets and deli counters with bacon around central Minnesota, but when we arrived at the bacon section of the Walmart Supercenter we were overwhelmed…and my wallet was soon emptied.

This Walmart Supercenter had over 30 varieties of bacon on the shelf. I turned the corner and their was another whole bin of bacon. I went to the deli counter – more bacon. My mind was racing. I only had a few hours left on my Elk River trip and needed to make quick decisions.

From fully cooked hickory smoked bacon to turkey bacon to the jumbo 3 pound pack of bacon ends & pieces, I grabbed as much bacon as I could carry and made my way toward the door. 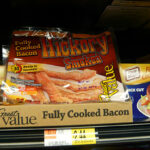 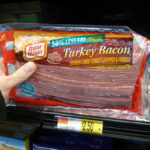 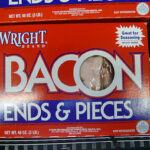 I was stopped in my tracks yet again when I spied even more bacon varieties at the deli counter. Deli worker Paula helped us out by thin-slicing some Canadian back bacon and pointing us toward the pre-cut prosciutto and pancetta. Oh man were we going to have a bacon festival that night.

When all was said and done we left the store with two grocery bags stuffed with about a dozen packages of a variety of bacon products. That night we made bacon-wrapped filet mignon, bacon wrapped bacon wrapped bacon (BWBWB), and fried up some plain old strips of applewood smoked bacon, turkey bacon, and so on. We purchased so much bacon that I left an entire shelf of my family’s refridgerator stuffed with bacon. No one complained.

Have a great bacon shopping story? Contact us or write your story in the comments area below.