Bacon at the Minnesota State Fair

One of our bacony friends, Anitamartini, traveled to the Minnesota State Fair last fall and prompted us to put this event as a must-see in 2009. As she stated on her blog “I carefully constructed an itinerary, mostly based on going to the State Fair’s online Food Finder and typing ‘bacon’.” There were 29 vendors serving bacon-related items ranging from candy-coated goodness to complete meals. 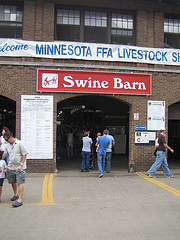 One example was Big Fat Bacon, which is a “1/3 lb slice of bacon, fried and carmelized with maple syrup, served on a stick with dipping sauces”. Oh my what a wonderful world it is in which we live!

This year’s Minnesota State Fair takes place August 27 – September 7, 2009 at the Minnesota Fairgrounds, 1265 North Snelling Ave., St. Paul, MN. We’ll be sure to have a Bacon Today correspondant there to bring you all the bacony details!